This event is a competition between runners and cyclists with (usually) the first 10 in each category to score. The winning team holds the Fisherman Trophy for one year. The trophy is named after The Fisherman Inn from where the race starts and where the prize giving takes place afterwards. On the few occasions where a bucket of lukewarm water is not provided in the pub cellar to shift all that ground in dirt, ample washing facilities can be found in the nearby Leeds-Liverpool canal! 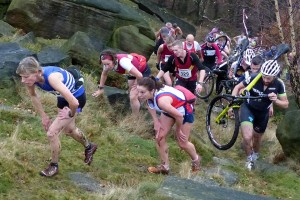 Online results will be posted on the day here