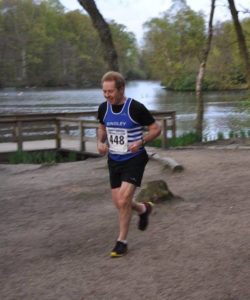 Phil Hawkswell in the 2017 race

All races start and finish at the lower car park sited inside St Ive’s Estate near to the Bingley Entrance.

Enter on the day

Older juniors can choose to run either course, but the race is NOT suitable for under 8s (sorry!) and under 10s MUST do the red route.

As always, please have a look at the course before you run.